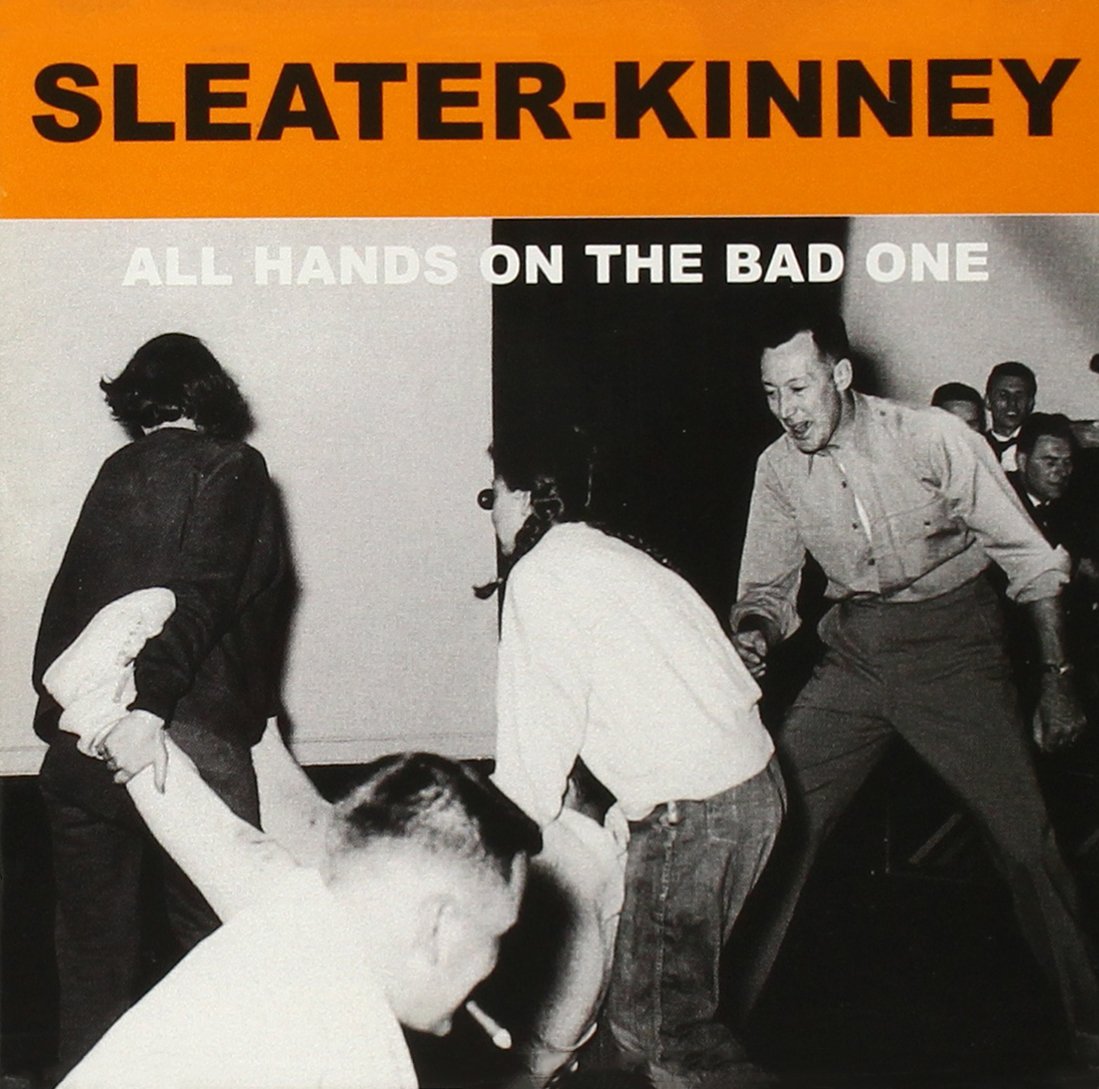 We didn't make a tape, because you'd wear it out.

"The Ballad of a Ladyman," the opening track on Sleater-Kinney's fifth release, boasts "I could be demure like girls who are soft for boys who are fearful of getting an earful /Â But I gotta rock!" And rock they do; "i"All Hands on the Bad One's lineup of twitchy but forceful rock songs bests the band's previous releases. The delicious tri-vocal charges of Carrie Brownstein, Corin Tucker, and Janet Weiss spider-webs all over their corner of rock, careening in all directions but unifying to make a beautiful design. Most obvious on this release is the band's yearning to slip free of the surly bonds of punk. The seesaw guitar riff in "Ladyman" is arena-ready, and the group's harmonizing reaches new heights of "Hey, cool!" on "The Professional" and "Milkshake and Honey." Or, to put it in stricter terms, All Hands on the Bad One is a whole lotta fun. --Jason Josephes

I've been waiting anxiously in the foothills for Corin Tucker's voice to come down off the mountain. At night the villagers used to hear her baying at the moon. Alas, the impassioned Sleater-Kinney frontwoman has left her banshee goat of a wail up to pasture on the craggy cliffs. All Hands on the Bad One finds the Northwest power-trio at their most melodic, playful, sarcastic, and punchy. Occasionally the spirit of the goat god still springs from Tucker's belly, but these screams follow baiting pop harmonies. Besides, when Rolling Stone uses the words brilliant and 'fury' in the latest glowing Britney Spears review, Corin's outbursts feel positively baptismal.

Sleater-Kinney and Fugazi reside alone in the top echelon of American punk rock. They make darling twins. Both bands continue to grow in talent, despite the jaded whines of old schoolers. Both feature dueling guitars that bobble complex, inventive lines like ping-pong paddles. (And Sleater-Kinney don't even need a bassist to lock the groove.) Both can raise the hair on the back of your neck, the ass out your seat, and the volume on your stereo. Most importantly, both hold a mirror up to the face of themselves, their scene, and society in general. You better believe that 'And for all the ladies out there I wish/ We could write more than the next/ Marketing bid/ Culture is what we make it/ Now is the time to invent!' is the 'We owe you nothing/ You have no control!' of 2000. Now that the smoke has blown away after the media exploitation of the riot grrl scene, the true believers remain behind-- not working PR for emo bands.

But preaching has its limits. After all, a band can't write a song called 'You're No Rock n' Roll Fun,' and load it with lyrics such as, 'Like a piece of art/ That no one can touch/ Your head is always up/ In the clouds/ Writing your songs/ Won't you ever come down,' without actually having some fun. The album opens with the proposition of 'Eye cream and thigh cream/ How 'bout a get-high cream' before shouting 'but I gotta rock!' and bursting into oo-waah's and handclaps. 'Milkshake n' Honey' spits wit at expatriates in Paris as Corin rolls her eyes at the type of denizens in The Sun Also Rises. Acting the roll of the insolent daughter, Tucker exclaims, 'Daddy says I got my mama's mouth/ I'm all about a forked tongue and a dirty house.'

But this isn't poetry! More than ever, S-K put four to the floor and hammer away on infectious riffs. A brash return to vigor after the mellower The Hot Rock, All Handswill win over new ears who previously found the sound too sky high, loose, and angular. Like a David Mamet character rewrite over a Joel Schumacher script, Corin reveals greater character depth than ever before. All Hands on the Bad One finds Sleater-Kinney at their most fist-pumping (on the title track), lovely ('Leave You Behind'), longing ('The Swimmer'), and bratty ('The Professional'). Janet Weiss hammers harder, Carrie Brownstein smothers with perfect harmonies while digging deeper on the E string, and Corin grabs your aorta and strokes. When Sleater-Kinney, the band with the busiest guitar lines and boldest voice, turn in their best effort yet, it demands your attention. --Pitchfork

Sleater-Kinney switched gears on their follow-up to the challenging, introspective The Hot Rock, delivering their brightest, most accessible album to date with All Hands on the Bad One. That's partly due to a renewed assurance in craft -- the arrangements here are the most refined of the group's career, and their performances the most polished. Corin Tucker seems to be in complete command of her voice as an instrument, delivering her most nuanced vocal performance to date. Tucker and Carrie Brownstein's guitar interplay is up to their usual standard of intricacy, but instead of wildly careening off one another, the two mesh more seamlessly than they ever have. Plus, drummer Janet Weiss had been honing her skills as a backup vocalist, and the group makes full use of that extra instrument, packing the tracks with lilting three-part harmonies. Yet all of this craft and control shouldn't be taken as evidence that Sleater-Kinney has toned down the passion that makes them so exciting. Even if All Hands on the Bad One isn't as desperately cathartic as their previous records, there's a contagious exuberance in the performances, and the band is absolutely brimming with confidence and vitality. Though the record still covers serious political and emotional topics, its overall aura is best summed up in 'You're No Rock n' Roll Fun,' a bouncy, playful jab at snobby scenesters unable to remember the good times at the core of so much great rock amp; roll. Not only is All Hands on the Bad One Sleater-Kinney's most consistent overall set of songs since Call the Doctor, it's also evidence that the band has taken that philosophy to heart. --All Music Guide

With All Hands on the Bad One, their latest bundle of wild gifts and contradictions, every trace of hesitation is gone: Go ahead and flunk my ass, Corin Tucker dares skeptics and fanatics alike, savoring each word with a kickboxer's taunting grin. (She can find more tactile delight in a handful of raw syllables than most singers discover in a whole career.) Being critical darlings (however well-deserved ones) has always given Sleater-Kinney the air of straight-A-student punks, the endearing kind who've always read the right textbooks and never failed to strike the proper empower-chords. In 'Youth Decay,' 'All Hands on the Bad One' ('We would be no better'), and the alternately scathing/uproarious 'You're No Rock n' Roll Fun,' they wrestle with the lust for approval, and break free from it. Especially in 'You're No Rock n' Roll Fun,' they jump into the backlash against their own virtuous image feet-first, bouncing different points of view off each other like blindfolded gropers in a mosh pit. Playing hedonism against upright integrity ('Like a piece of art/That no one can touch'), they catch the ridiculous limitations of both, but mainly capture the beguiling giddiness of temptation the inadmissible wish to get dirty, eff the consequences, and be what we are most afraid of...

...[O]n an album whose most emblematic song, 'Milkshake n' Honey' (with Corin Tucker turning herself into a sex predator/kitten combination of Serge Gainsbourg and An American Barbarella in Paris), happily rhymes 'Pick up the phone' with 'Meet me at the Sorbonne,' desire has the first and last word. There's a sense of playful trashiness here that carries over from Tucker's side project Cadallaca, the 69-teardrop garage outfit whose new four-song EP, Out West, is as much a throwback to Johnny Guitaras it is to the Seeds or the Mysterians except on Out West, Sarah Dougher's organ lays siege to the saloon. With Cadallaca, the melodrama, despair, and longing are all bigger than life and cheaper than a hard-boiled paperback ('God gave up on me that day!' -- not a bad send-up of PJ Harvey's spaghetti-gothic heroines, either). No part of All Hands on the Bad One is quite so blatant or magnificently corny, but there's the same willingness to embrace abandon and risk looking absurd or foolish in the process. It takes as much nerve to make the hilariously pornographic noises that fade out 'Milkshake n' Honey' as it does to contemplate the horror and disgust of 'Was It a Lie?,' where Tucker tries to comprehend the surveillance-cam voyeurism that makes the nightly news into a snuff-film factory and an anonymous woman's death into tabloid-TV fodder. The spectrum of fun and experience here is much greater than before, but the album seems no less brutally intimate for that: Sleater-Kinney have made their Beauty and the Beat, even if its pretty uncapped teeth still retain the bite of Liliput's 'Split.' Danger, glamour, sex, and dread what sticky fingers these conspirators of pleasure have. Yet All Hands on the Bad One doesn't settle for the Go-Gos' demure ministrations; it means to work the whole loving fist all the way up your tight little mind. --Village Voice